The Countdown to the Royal Wedding - Pearls 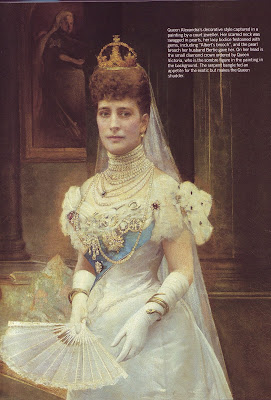 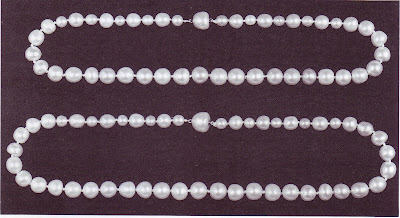 The Queen Anne and the Queen Caroline Necklaces
These 2 strands of large lustrous graduated pearls with pearl clasps are always worn together. The top strand of forty six pearls weighs 1,045 gramms and is said to have belonged to Queen Ann, the last of the Stuart monarchs.

Queen Caroline wife of King George II had a great deal of valuable jewellery including four very fine pearl necklaces. After wearing all of them at her Coronation the fifty best pearls were made into a single strand necklace. These are at the bottom of the picture. This strand weighs 1,429.2 gramms. Both necklaces were given to Princess Elizabeth when she married. The Princess wore both strands when she married Prince Philip. 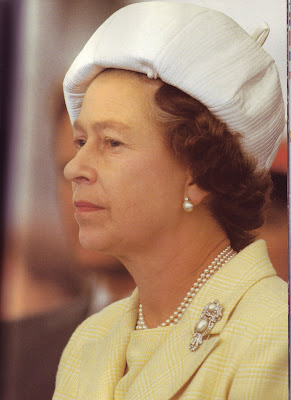 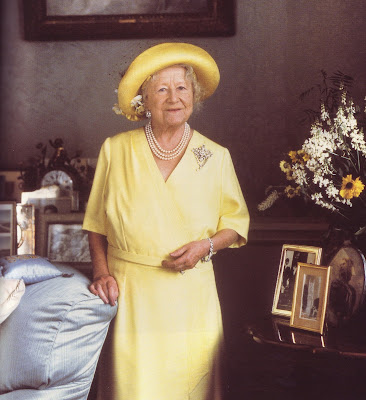 Strands of pearls are favourite day time jewellery of both the Queen and the Queen Mom. 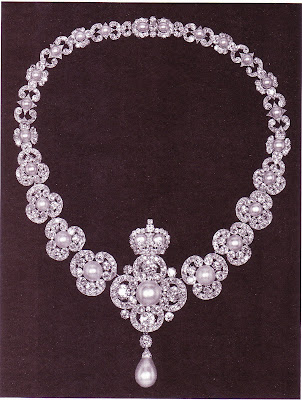 Queen Victoria's Golden Jubilee Necklace
In 1887, the "Women of the British Empire" each gave between a penny and a pound to provide a celebratory memorial for the Queen's fifty years on the throne. Part of the money raised was used to commission a large equestrian statue of Prince Albert but the rest of the money was spent on this necklace, which was presented Queen Victoria on June 24, 1887. The design is of graduated diamond trefoils, each with a pearl centre. The centre piece is a quatrefoil of diamonds with a a pearl centre and drop pendant. Surmounting it is a pearl and diamond crown. It is possible to detach the centre piece and wear it as a pendant. Queen Victoria left the necklace to the Crown in 1901. There are at least three necklaces of this design in existence. Princess Alexandra, the Hon. Mrs Angus Ogilvy, was given one as a wedding gift by her husband in April 1963, and it only lacks a crown on top of the quatrefoil to be indistinguishable from the Queen's. 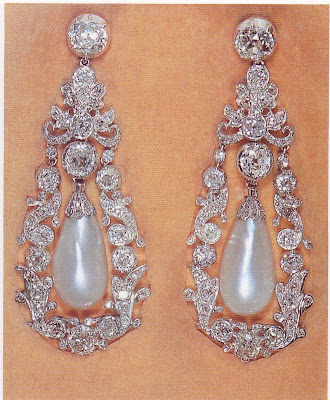 Queen Mary's Pendant Earrings
These earrings were converted by Queen Mary from a pendant necklace. Each has an oval pearl suspended from a collet diamond hanging in an ornate frame of scroll design, set with diamonds. 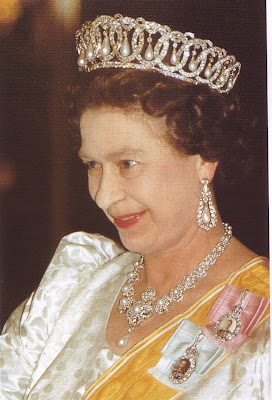 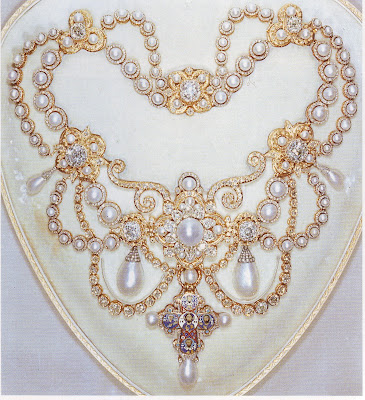 Queen Alxandra's Dagmar Necklace
In 1863 King Frederick VII of Denmark had the crown jeweller in Copenhagen design this necklace in the Byzantine style as a wedding gift for his daughter, Princess Alexandra, later Queen Alexandra of England. It had 118 pearls and 2,000 diamonds. Festoons connecting gold medallions, with a large diamond in the middle of each, surround a centre piece of diamond set scrollwork. The two large pear-shaped pendant pearls on either side were so valuable they had been exhibited at the Great Exhibition at the Crystal Palace in 1851. This is shown in its original case. Hanging on a gold loop from the centre piece is a cloisonne enamel facsimile of the 11th centry gold Dagmar Cross. 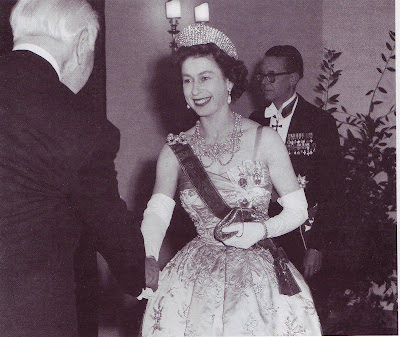 The Queen attending a dinner at the German Embassy in London in 1958. She has removed the cross and the two large pearl drops the the Dagmar necklace. 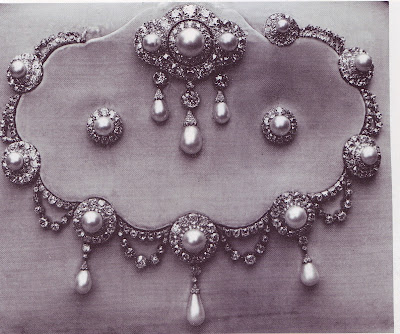 Queen Alexandra's Triple Drop Necklace and Brooch
Made by Garrard and given to Princess Alexandra by the Prince of Wales as a wedding present in 1863. The necklace has eight circular clusters of diamonds with a large pearl in the centre of each, connected by festoons of diamonds. From each of the three front cluster hangs a pear shaped pearl. Shown in its original case. 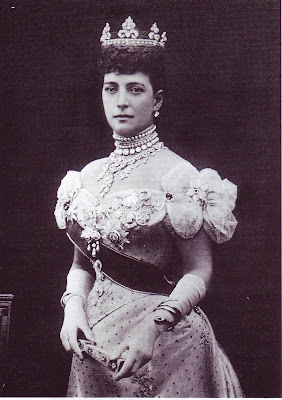 Princess Alexandra wearing the brooch in 1896. 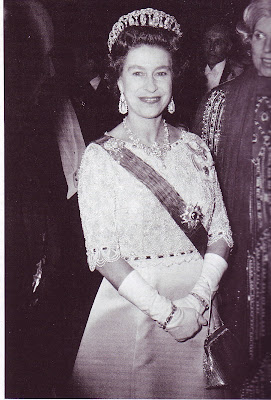 Queen Elizabeth wearing the brooch in 1972 while on a State visit to France, reportedly the only time she has worn it. 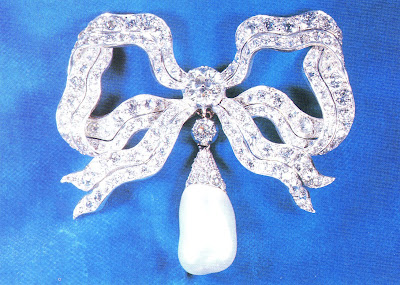 Queen Mary's Kensington Bow Brooch.
In July 1893, the committee of the Kensington Wedding-Gift Fund representing the inhabitants of Kensington presented her with this bow-shaped diamond brooch with a large oriental pearl drop. It was made by Collingwood and Company. She wore the brooch at King Edward VII's Coronation and at her own in 1911. 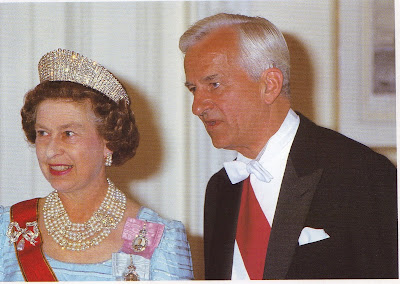 The Queen inherited the Kensington bow brooch in 1953. Here she wears it in 1986 when she attended a dinner given by the President of West Germany during his State visit to Great Britain. Her six-row pearl necklace set with different sized diamond plaques and the matching earrings were a gift to the Queen from the Amir of Qatar on her 1979 visit to the Gulf States. 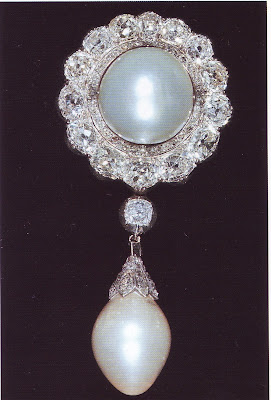 The Duchess of Cambridge's Pendant Brooch
A baroque pearl in a diamond set mount hangs from a diamond pendant below a large round pearl framed by fourteen brilliant cut diamonds. The Brooch belonged to Queen Mary's grandmother, Princess Augusta, Duchess of Cambridge. It was inherited by her younger daughter, Princess Mary Adelaide, Duchess of Teck. She died intestate in 1897 and her jewellery was divided among her four children, this brooch being part of Queen Mary's portion. 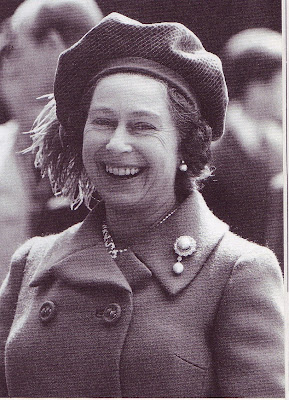 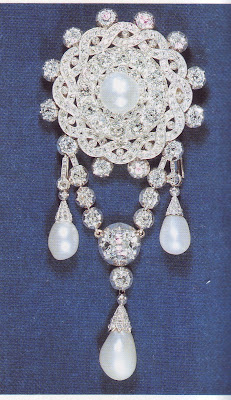 The Duchess of Teck's Corsage Brooch
This corsage jewel is typically Victorian in design. The brooch consists of a large pearl set in a circle of diamonds enclosed in a diamond plaited scroll frame with twelve collet stones set around the edge. A U-shaped chain of large collet diamonds ends in three pendant drops. 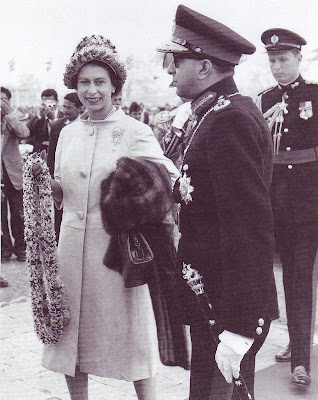 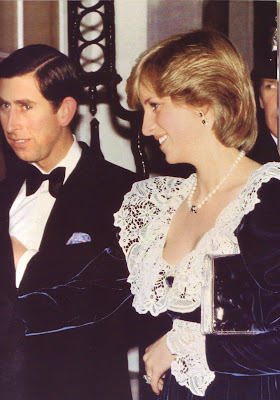 The large diamond and sapphire brooch pinned on Diana, Princess of Wales, dress was a wedding gift from Queen Elizabeth, the Queen Mother. This blue velvet dress with a collar made from antique lace that belonged to Queen Victoria, was designed especially for this brooch. But Diana didn't wear brooches to often. 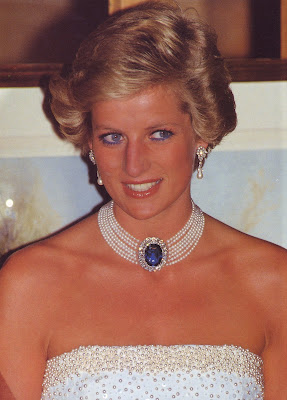 Diana had this spectacular pearl choker made with the brooch as the centre piece. If given the choice of one piece of Royal jewellery to call my own, this would be my pick. Absolutely stunning.

Next time - The Crown Regalia

From the book - The Queen's Jewels by Leslie Fielding
Posted by Unknown at 12:01 AM

Oh good, you are leaving a comment. I love to hear from you. Thank you for visiting. Please come back soon.